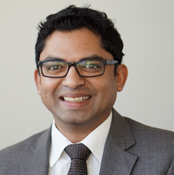 Suren obtained his medical degree at Monash University in 2000 and became a fellow of the Royal Australasian College of Surgeons in 2009.

He spent two years specialising in endocrine surgery in fellowship positions at the Austin and Western General hospitals. He gained further international experience in 2012 and 2013. In New York, he visited the world renowned Mount Sinai Medical Centre. In Colombo, he learned how to deal with more advanced thyroid disease than is usually seen in developed countries. In Hanoi, he learned the technique of endoscopic trans-axillary thyroid surgery, which leaves no visible scars on the neck.

Suren’s interests include benign and malignant disease of the thyroid and parathyroid glands, endoscopic trans-axillary thyroid surgery and workup and management of adrenal disease. He also performs elective and emergency surgery for gallbladder disease and hernias.

Away from medicine, Suren is a classically-trained flautist and saxophonist who plays with the Australian Doctors Orchestra. He is a passionate supporter of the Sri Lankan cricket team and the Hawthorn football club. He regularly visits Sri Lanka where he is involved with projectBEAP, a charity currently building and equipping a trauma centre on the east coast, which was devastated by the Boxing Day tsunami and, more recently, civil war.

Suren has public appointments with Monash Health (Clayton, Dandenong, Berwick and Moorabbin), Eastern Health and St. Vincent’s. He is accredited at Mulgrave, The Avenue and St. John of God Private Hospitals.